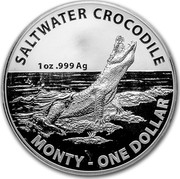 Obverse:
Portrait of the Queen Elizabeth II in the field of the coin.
Lettering: ELIZABETH II AUSTRALIA 2016 IRB

Reverse:
Monty is one of Australia Zoo’s star crocodiles, who has been treated and raised with love since he was captured in 1975. He has been nurtured over the years, and grown to an amazing 3.7 metres and 400 kilograms.
Lettering: SALTWATER CROCODILE 1 OZ .999 AG MONTY - ONE DOLLAR TD