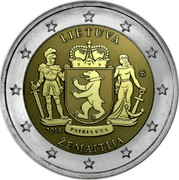 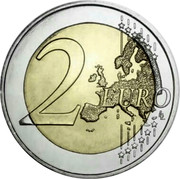 Obverse:
The centre of the national side of the coin features a bear standing on its hind legs, with a chain collar on the neck. It has been depicted in the coat of arms of Samogitia since the 16th century.
Lettering: LIETUVA PATRIA UNA 2019 ŽEMAITIJA

Reverse:
A map, next to the facial value, shows the European continent without borders.
Lettering: 2 EURO LL